Just to repeat for the slow learners in the room (who, sadly, also like to congratulate themselves for their dull-witted ideas), the Women's March 2017 was never, ever, about trying to change the election results. That ship sailed people, you're the only ones still stuck in the past.

The Women's March 2017 has always been about making sure Trump knows his bullshit stinks and we're not going to sit by while he smears his shit all over the country.

It was one thing when he was bullshitting you slow thinkers - it was kind of funny watching you cheer how good you smelled after wallowing in his bullshit.

But, the game changed, didn't it? Yeah, and you slow-thinkers still haven't caught on to how it changed. Trump isn't going to stop shitting on you. He's going to do it more and harder and to all the rest of us, too

Come on, slow-learners. Catch up - we've moved on to making sure Trump and his billinaire swamp monkey cronies know we recognize tolitarian bullshit and we didn't tolerate it in 1945 and we're not putting up with it today. 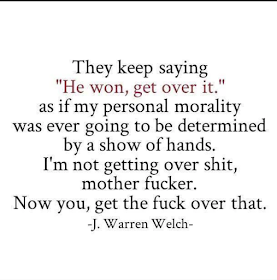